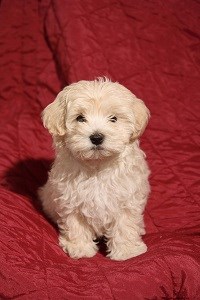 Presented with a large swelling, thought to be a haematoma. This had developed between the scapulae following microchip implantation. Biff was lethargic with vomiting and diarrhoea

Biff was fairly collapsed, tachycardic with weak peripheral pulses and very pale mucous membranes. A systolic murmur, likely to be haemic, was audible on both sides of the thorax. A large swelling (approximately 10 x 8cm) was present between the scapulae and extending down the right side of the thorax. A smaller subcutaneous swelling was present on the ventral thoracic wall

Biff on follow up has remained welll with no further major incidents of bleeding since diagnosis. His owner and vets are very aware of his condition and are now prepared with readily available plasma products should Biff suffer any trauma or require any surgical intervention