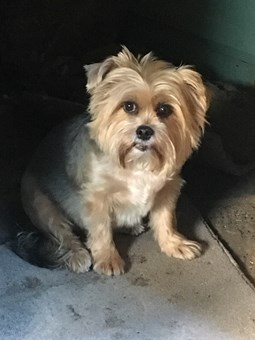 Meet Bridget, a 10 year old Shorkie from Wales. Bridget was diagnosed with Diabetes some years ago and her vets and owners had been working hard to stabilise this condition. Bridget then developed an unexpected complication when she began passing abnormal faeces that indicated the presence of a bleeding ulcer. The continued blood loss was difficult to control which resulted in her becoming anaemic.

Bridget became weak, lost her appetite, and was showing signs that she was struggling to cope with the anaemia. The red blood cell content of blood is measured as a percentage of the overall volume, and it is normally around 45%. Bridget’s vets had been monitoring her red cell levels closely whilst managing the ulcer and this had dropped to just 13%. This meant Bridget was seriously ill and needed an immediate blood transfusion.

At the same time as Bridget was in one room at the vets, we were holding a Pet Blood Bank donation session in some of the other rooms. Having identified that Bridget needed blood, a compatible donor for her was immediately identified from the list of dogs we had giving blood that day. Cora was the lifesaving donor who had just donated a unit of blood, which the practice took to use for Bridget’s transfusion. 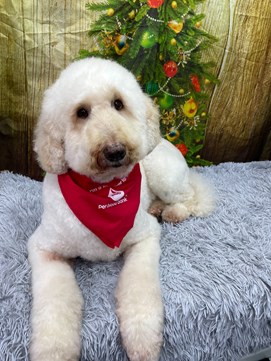 Cora’s owner Julie, said, ‘Helping to help other animals in need fills us with pride. Cora has to retire from donating this year, so we were emotionally touched she helped by being a blood match on the day. Thank you for all you do.’

Within hours, Bridget was brighter and was able to go back home. Three days later, she returned for a check-up and thankfully she was back to her normal self.

Bridget’s owner Martyn, said, ‘It is very hard to express how grateful I am to Cora and her owners for facilitating her blood donation. It is immeasurable. I will always be in gratitude to Cora and her family.’

Dogs like Bridget rely on blood being available in these life-threatening situations and we aim to ensure this is always the case. However, more dogs like Cora are needed to come forward and give blood to meet this aim. If your dog is fit and healthy, between 1 and 8 years old, weighs over 25kg, and is confident, they could become a blood donor.

To help dogs like Bridget, find out more about your dog becoming a donor or the other ways you can get involved.